Work on Lear continues, targeted for March ’15.  The head shells now have their eyes — no painting, hair, nor eyelids yet, but the souls begin to wake.  It’s 4/5ths roughly memorized, 4/5ths roughly staged, but it’ll take every inch of the next nine months to make it work.

And in between the blurts of work, we ask ourselves, “Why? Why King Lear?”  Our current house-concert play Gifts, though it’s full of loss and grief, is possibly the most “feel-good” show we’ve ever done, while Lear is likely the most despairing play in the English language or any other.

How so?  A man is stripped of his power, his pride, his sanity, the last shreds of his identity.  Then, for a few brief scenes, we see the glimmers of self-knowledge, the redemption that illumines The Winter’s Tale and The Tempest.  And then, with Cordelia’s death, Shakespeare kicks us in the face, with malice aforethought.  None of his sources — Holinshed’s Chronicles and an earlier King Leir — end in ashes.  In those, the battle restores Lear to the throne and Cordelia lives.  Nahum Tate’s adaptation revisited that path and held the stage for over 150 years. 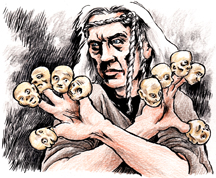 Why does Cordelia die?  Why, in fact, is the battle lost?  It’s surely the quickest battle in all of Shakespeare and the most arbitrary in its outcome.  Lear is stripped of illusion, restored to sanity, and after the battle’s loss even reconciled to a life in prison beside his loving daughter —and at that point our own instincts cry for the conclusion of the Book of Job, all restored.  Then she’s hanged, and the old man dies trying to will a spasm of life into the corpse.

When both Lear and the villains are dead, the one honest man Kent declines to take up power, goes off to die, and Edgar, with his brother’s blood on his hands, can only say, “We who are young shall never see so much nor live so long.”  Not the most inspirational inaugural speech.

We believe in the miracle of The Winter’s Tale, but we also believe in the bald reality of Lear.  The one is what we long for and aspire to; the latter is what is.

For us, it’s not a story of nasty daughters vs. nice daughter.  It’s about what absolute power brings about in a man, a king, a nation “who hath but slenderly known himself.”  Blindness, foolishness, madness — all passing the point of return.  It’s what we feel is rampant in our hallways of power today.  These words put a finger directly into the heart of the wound, or the wound of the heart.

No, we’ll offer no visual referents to draw parallels with current politics, corporate rapacity, or global boil.  Only the story.  Is it useful, justifiable, to show something horrid?  Our audiences will tell us.

As announced, we’re coming East to play at the Ko Festival of Performance July 25-27, with a very intense workshop July 28-August 2.  Still some room in the workshop.  If you’re in New England, our Ko presentations are on the KoFest website.  And check our stops coming and going.

Three days camping and listening to music at the Kate Wolf Music Festival in Laytonville, CA.  Hot as hell, but mellow beyond belief.

The Lear drawing is by Eli Bishop.  It’s one of five for a grant application.  I aspire to look like that.  He tells me I do.