Six months till the preview of our King Lear.  Again, you’re invited to visit our personal blog, DamnedFool.com for a weekly chronicle of our explorations.  Sample this week’s, and if you like it hit the “Follow” button to get the (usually) regular Sunday posts. 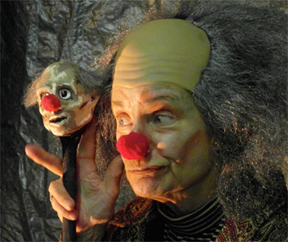 As of now, all the 18 heads are painted (plus the 10 tiny finger puppets who constitute his court), and we’re affixing hands to bodies.  The puppets are still bald and naked, but they don’t seem to mind.  We’ve roughly staged the whole piece and have now stumbled our way back through the first two acts, revising.

Technically, it’s a juggling act.  The puppets are distributed in twelve slots along two side bars and on the floor of our little 4 x 6 x 7 ft. cage, and the traffic management is maddening.  In this scene, we need to get Cornwall and Regan from Slots 4 & 6 into 7 & 8 on the opposite side so that Lear can get Regan on his right hand while the Fool slips Goneril from Slot 3 onto Lear’s left hand.  When we hit a glitch, we have to go back through a half-dozen position charts to correct them all.  There are times when you want to yell at the puppet, “Just walk over there!”  It takes a while for them to gain the confidence to grow their own brains.

Still, even at this crude stage, there are times when the text just grabs you and surfs you on its wave.  As an actor/director, the “director” part of my mind tends to be dominant for a long time until I feel confident of the external form, and only then does the “actor” become fully engaged.  This time it’s different: as much as I tell myself that this time I’ll just mark thru the scene for the technical shifts, I invariably find myself swept up emotionally in Lear’s journey.  The text just doesn’t allow you a quiet rowboat on the lake; you’re shooting the rapids before you take a second breath.

This week we’re a bit frantic with trying to shoot a few tolerable minutes of rehearsal video to submit as part of a grant application.  (How to do this when you still need six months of work before even previewing it? Well, that’s Life in the Arts.)  I’m starting to work on the lighting, plus some costume sketches.  Next week, Elizabeth leaves for two weeks in Europe, and I’ll be doing some very intensive character work with video “selfies” to find the voices and gestural languages of my multiple personae.  When she returns, we launch into Act 3: the storm.

Since returning from our Eastern tour, we’ve canned about 15 jars of apple sauce, plus freezing containers of apple chunks and apple butter, harvesting our zucchini, tomatoes and other of nature’s bounty.

We’re now on Chapter 20 of the rewrite of our fourth novel Hammers and continue to accumulate rejection slips on the others.

The first printing of our sketch anthology Rash Acts, first published in 1989, has finally sold out, and we’re doing a layout for an expanded second edition, since it still seems to have a market and we can now do it print-on-demand.  We just did a Skype visit to an Intro to Theatre class in Auburn, Alabama, that regularly uses Rash Acts as a textbook.  And a theatre class at Humboldt State University will be doing a tour of a collection of these short pieces.

Elizabeth is off for two weeks in Europe, visiting our daughter in Tuscany, friends in Amsterdam and Zurich, and walking among the standing stones at Carnac.  I’m staying home this time but in late October will take two weeks of my own in Merida and the Yucatan, returning just after Dia de los Muertos.  With luck, my Spanish will be slightly improved.